These strains are some of the earliest seeds released by Equilibrium Genetics. They were created in 2012 on a rooftop in East Oakland, California. Most of the female plants were sourced in the East Bay. The exception is Blue Nepalese, which was from a cultivator in La Honda, California. The 99/OG male providing pollen for the following crosses is a hybrid of a rare cutting of Cinderella 99 ♀ (circa 2011), and a stout, wide leaf Tahoe OG male (same Tahoe OG ♂ used in Tahoe Thunder). The male was found in a feminized seed pack, the rare male outcome of a Tahoe OG S1. This combination of C99 and Tahoe OG created plants with thick, trichome covered buds and long running colas exuding aromas of sour fruit / citrus / OG.

>Return to the Seed Archive 🏛

“This was my first experience with Equilibrium Genetics and I’m highly impressed.” 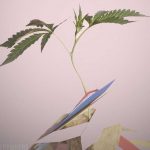